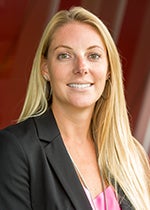 Kaila Lavin was born in New Mexico and raised in Arizona. She began working at a recreation facility in high school and loved the fun environment it created. From there, she attended the University of Arizona and began working at its Student Recreation Center. Over the next four years, she advanced through several positions within the department and decided that the recreation industry was the career path for her.

After graduating from the University of Arizona with a degree in Psychology, Kaila moved to California. She attended CSUN and received her graduate degree in Tourism, Hospitality, and Recreation Management (RTM) while serving as a graduate assistant for the new Student Recreation Center during its construction phase. Since then, Kaila has continued working her way up at the SRC to her current role as Director. 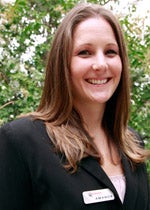 Amanda grew up in a small town in the Antelope Valley. She developed a love for fitness early in life, spending most of her time after school either participating in sports or helping out at her aunt’s fitness facility. This love eventually grew into the desire to pursue a professional career in the fitness and wellness industry.

After graduating from CSUN with a degree in Kinesiology — Exercise Science, Amanda worked in corporate fitness for several years, helping working adults stay active and healthy while at work, but she recognized that she still had more to learn. So, she returned to CSUN, acquiring a graduate degree in Nutrition & Dietetics.

During this time, Amanda stumbled upon new opportunities in collegiate recreation and assumed a position as the Fitness Programs Coordinator for the Fitness Center operated by the Recreational Sports division of Associated Students. After loving her experience working with college students, Amanda decided to continue and took on a position as the Fitness & Wellness Graduate Assistant for the SRC just prior to its opening in 2011. Soon after, Amanda was promoted to her current position.

In addition to her academic accomplishments, Amanda holds credentials as a Certified Personal Trainer through the National Strength and Conditioning Association (NSCA), a Primary Group Exercise Instructor through Aerobics and Fitness Association of America (AFAA) and a Level 1 Nutrition Coach through Precision Nutrition, along with several others in a variety of fitness formats. Jeremy Hamlett grew up in East Los Angeles and attended California State University, Los Angeles. During his time at CSULA, he worked in the University Student Union (USU) as a student employee and discovered his future vocation in higher education. It was during his time at CSULA that he also found his avocation, officiating sports. He has been involved with officiating youth and high school baseball, basketball and football for over 25 years, and has served as a board member and president of his local baseball association.

After receiving his undergraduate degree, Jeremy initially worked at Occidental College and then joined the USU at CSUN in 2002. During his first 16 years at the USU, he was involved with Commercial Services and Operations & Facilities Planning. He joined the SRC team in 2019 as the Manager for Intramural Sports/Day Camp/Games Room. Angela Gattoni grew up in Middletown, a very small town located in Northern California. From a very young age, sports and fitness have always played a huge role in her life. Throughout all four years of her high school career, Angela played volleyball, basketball, and ran track for the school’s athletic teams.

Following high school, Angela moved to Southern California to attend CSUN. Angela knew she wanted to incorporate her love of sports and fitness into her school studies and she received her Bachelor of Science degree in Kinesiology from CSUN in 2016.

Upon graduating, Angela moved on to work as a manager for a small fitness studio in Granada Hills. When she learned of the opening for the Membership Services Coordinator position, she was extremely excited and jumped at the opportunity to work for the SRC once again. One of Angela’s goals is to continuously motivate student employees and provide them with professional skills and tools to help them be successful in their future paths following graduation.

In her time outside of work, Angela enjoys watching sports, staying active, and visiting her family up in Northern California as often as she can. Alfredo Padilla was born and raised in Michoacán, Mexico before his family moved to Santa Ana, California when he was 12 years old. After graduating high school, he developed a passion for fitness working at a Central Santa Ana community center coordinating their health and fitness programs.

Alfredo eventually transferred to California State University, Northridge (CSUN) from Orange Coast College in 2014. When he saw the Student Recreation Center (SRC), he made it his personal goal to work there. In May 2015 he was hired as a Student Personal Trainer. Just a year later he became the Student Personal Training Supervisor and eventually earned his current position of Fitness Training Coordinator. Alfredo received his Bachelor of Science degree in Kinesiology with an emphasis in Applied Fitness and Active Lifestyle Development from CSUN. He holds credentials with the National Academy of Sports Academy (NASM), Functional Movement Screening® Level 1 Certified, and Spinning®.

Alfredo enjoys long distance running, surfing, biking and occasionally takes road trips with friends. His personal goal is to motivate others to be active and live a healthy lifestyle. Ryan Hairapetian grew up in Glendale, California. Early on he was involved in multiple sports, such as gymnastics, martial arts, water polo, swimming, running, and snowboarding. In high school, Ryan was the captain of his water polo and swim team for Hoover High School. Showing a high level of passion for aquatics, Ryan decided to become a lifeguard for the City of Glendale.

While developing his love for recreational sports, Ryan pursued his Bachelor of Science in Tourism, Hospitality, and Recreation Management at California State University, Northridge. Throughout his professional life, Ryan has received multiple certifications that have allowed him to excel within his career. He has completed his Emergency Medical Technician course, expanding his knowledge as a first responder. Ryan welcomed the opportunity to oversee the Aquatics Department as the Aquatics Coordinator for the Student Recreation Center at CSUN.

Ryan and his wife Jasmine live in Sunland, California and enjoy spending time with family and friends. They also enjoy hanging out at the beach, going for walks, and, most of all, having sushi. Scott Teves was born and raised in the San Fernando Valley. At an early age, he was very involved in music by starting a band and becoming section leader in the Taft High School drumline. Eventually, he discovered his passion for martial arts and fitness from his father, with the legendary Bruce Lee being one of his main influences. While developing his love for fitness, he got involved in USA Boxing and competed in amateur fights.

In college, Scott pursued a Bachelor of Science in Kinesiology with an emphasis in Exercise Science at California State University, Northridge. As an undergraduate, he began his employment with the University Student Union starting in 2015. He started as a boxing fitness assistant and eventually was promoted to boxing supervisor one year later. Throughout his time as a student employee, he fostered a personal passion for the field of student recreation. After graduating in 2019, he applied to work full time at the Student Recreation Center as the Fitness Operations Coordinator. Scott is also a certified personal trainer through the American College of Sports Medicine (ACSM) and is a certified TRX® Suspension Training Coach.

Outside of work, you may find Scott boxing, playing chess, or engaged in his favorite fighting game, Tekken. Chris Whitesides was born in Stockton, California and grew up camping, canoeing, and hiking all around Central Coast and Sierra Nevada. Academically, Chris received his BA from UCLA, his MS from CSUN and is currently pursuing his Educational Doctorate from CSULA. Professionally, he has worked for a variety of outdoor programs, including UCLA Outdoor Adventures, LA River Expeditions, Maui Kayaks, and the CSUN Aquatic Center. Chris currently works as the Coordinator for CSUN Outdoor Adventures and serves as a lecturer for the Department of Recreation Tourism Management. When he is not studying or outside in a canoe, Chris is an avid board game player. Drop by the Outdoor Adventures Office in the SRC and say hello!