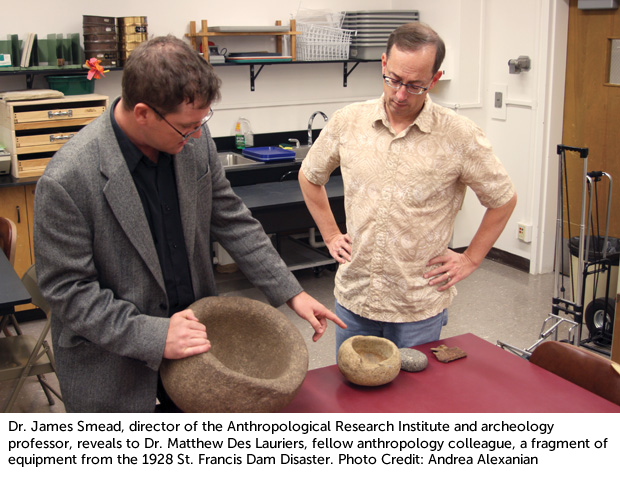 An anthropology professor holds his favorite artifact from the 1928 St. Francis Dam disaster, a rusty piece of metal with a faint number three.

“We are building a picture of what life was like on the edge of Los Angeles 80 years ago that is in some ways new and surprising,” Snead said.

The St. Francis Dam was opened in 1926 along a span of 1,300 feet in the San Francisquito Canyon. It held more than 12 billion gallons of water.

The dam leaked from the day it opened, and residents in the surrounding area joked that they’d see each other later if the dam didn’t break, according to a 2003 L.A. Times article

At about midnight on March 12, 1928 the dam finally did break. The 120-foot high flood came down the valley and obliterated everything in its path, drowning 476 people. It flowed all the way down to Ventura and into the ocean 54 miles away.

Although the archeological project is underway and entering into the second phase, Snead is excited by the artifacts collected so far and the possible stories of the victims in the disaster.

“We are trying to decide the best way to tell that story—because the story has been told in many ways—how can artifacts contribute to our understanding of what happened in a different and unique kind of way?” Snead said. “We find often times this is the forgotten part of the story. It’s about the daily lives of the people who were in the way of this disaster, who didn’t make it into the history books but whose evidence of their lives are scattered across the landscape.”

Archeology graduate student Ann Stansell documents the graves of each of the victims to see how they are memorialized and to get a list of all who were involved. 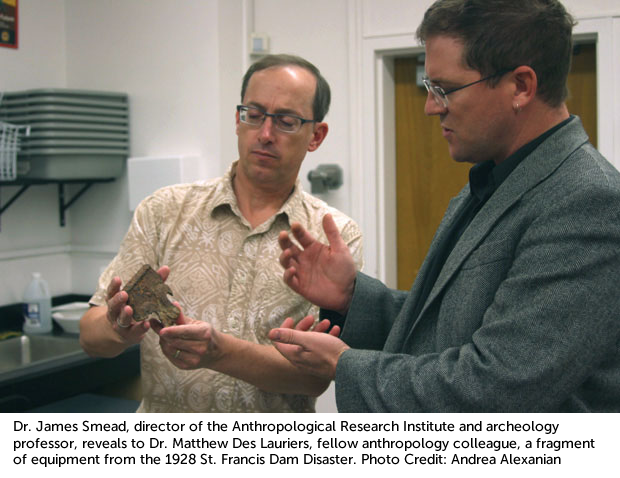 “The main purpose of my thesis is to address memorialization and memory of not just the victims, but the disaster itself. Both of which are largely forgotten,” said Stansell.

Efren Martinez, archeology graduate student, takes a different approach in his research by focusing on the Hispanic community affected by the disaster.

ARI not only conducts projects that generate a collection of archeological artifacts and gives CSUN students hands on experience, but it is also developing an outreach program to work with other students.

“I went to a class last year—a third grade class—they said (they) would love to have somebody. I took a bunch of artifacts, went down there and we talked about Native Americans. We talked about the Chumash people,” Snead said. “That’s a way that CSUN—the expertise that we get in this room—can get out into the community. We can help teachers, we can help students, it also helps us with the CSUN brand.”

Snead said his interest in anthropology and teaching was cultivated while growing up in New Mexico where he was surrounded by a vibrant and complex culture of Native American communities, Latino communities and archeological sites.

Snead noticed that people, including some CSUN students, do not realize the history of their landscape. Many people know about famous archeological sites outside of California, but some don’t realize there are various artifacts where they live.

“(The program) also helps CSUN in that we are increasingly seen as a place where this knowledge is being cultivated and a place where it is available to them,” said Snead. “We have an open bill policy. It’s not an esoteric thing that is being done by some pointy headed academics in the backroom, but it’s a thing that everybody could participate in, everyone can see, and understand. That speaks very well to what CSUN ought to be.”