College of Health and Human Development 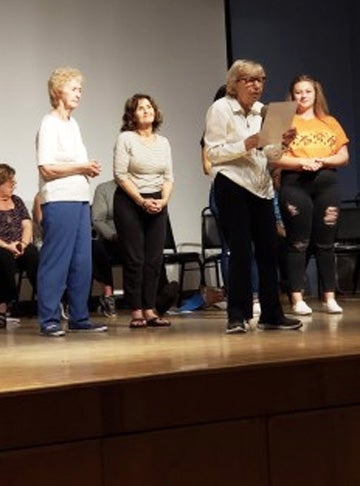 The inter-disciplinary project, Stage for All Ages, involves HHD faculty Samira Moughrabi (Nursing), Stephan Chung (Health Sciences), and Joongwon Lee (Recreation and Tourism Management) in collaboration with CSUN Theatre colleague Ah-Jeong Kim and facilitators from CSU Long Beach. A collaborative project set in the discipline of Theatre, the project is part of a yearlong study to demonstrate whether older community members who took part in a theatrical experience had reduced feelings of isolation and depression. Photo by Ah-Jeong Kim.

The Theatre is a place where people come together to creatively tell a story and share a communal experience, and, according to California State University, Northridge theater professor Ah-Jeong Kim, it may help your later years be full of life. Kim is part of a yearlong study that can demonstrate if older people who took part in a theatrical experience had reduced feelings of isolation and depression.

The research involves “Stages for All Ages: Devised Theater for Healthy Aging”— an intergenerational six-week program that studied the effectiveness of drama participation on adults 65 and older and CSUN students 18 an older. Those 65 and older were members of the ONEgeneration Senior Enrichment Center in Reseda.

“Theater is a communal art that breaks down the barriers among people and help older adults out of isolation and interact with others in meaningful ways,” Kim said. “Thereby it helps alleviate loneliness, depression, anxiety. Theater celebrates life and builds a community.”

Devised theater is a method of theater making where the script is created by participants through improvisational games, exercises, and storytelling. For this research, participants shared stories to build a performance based on the theme of community. Some told stories of the community they belonged to while others recalled life stories such as immigrating to the United States.

Kim is a professor of theater history and dramatic literature in the CSUN Department of Theatre. Her research areas include world drama, intercultural theater and contemporary Korean drama. In her community service, she explores theater that addresses autism, healthy aging, drug addiction, mental illness and more- in the community. She is a member of Nanoom Christian Fellowship Mission in downtown Los Angeles, which serves those afflicted with addiction.

After the performance culmination, older adults said the program gave them an opportunity to connect with others and students said they found a moment of respite from their stress while interacting with the older adults.

Throughout the course of the program, cortisol analysis was gathered. The samples will be sent to a lab and researchers will analyze qualitative data gathered.

“This study aimed at addressing loneliness and social isolation, which are common and seriously impact the physical and psychological well-being of the fast-growing American aging population,” said Moughrabi. “Nearly 100 audiences attended and were able to witness the effectiveness of devised theater in promoting healthy aging.”

In 2013, Kim collaborated with Moughrabi and theater lecturer Doug Kaback on “Theater for End of Life,” where theater and nursing students explored the impact theater had on caretakers assisting people facing death and those facing death. In 2014, she and her co-primary investigator David Boyns from the Department of Sociology received a grant from the National Endowment for the Arts for their research project “Joining the Spectrum: An Interdisciplinary Research into Effectiveness of Drama for Teens with Autism.”

This story has been re-posted from CSUN Today. Read the story in CSUN Today.